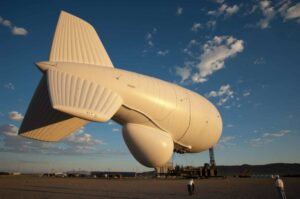 Raytheon Company has completed a series of laboratory tests that demonstrated how the JLENS radar can be integrated into North American Aerospace Defense Command (NORAD).

JLENS is a system of two aerostats, or tethered blimps, that float 10,000 feet in the air. The helium filled aerostats, each nearly as long as a football field, carry powerful radars that can protect a territory roughly the size of Texas from airborne threats. JLENS provides 360-degrees of defensive radar coverage and can detect and track moving objects like cruise missiles, drones and airplanes from up to 340 miles away.

“The lab tests proved that information from JLENS can be converted into a format that can be used by NORAD’s command and control system,” said Raytheon’s Dave Gulla, vice president of Integrated Defense Systems’ Global Integrated Sensors business area. “With JLENS providing data to NORAD, our military will have a more accurate picture of what is flying in the National Capital Region’s airspace, and be able to identify slow-and-low flying threats such as cruise missiles and drones.”

One JLENS system is scheduled to be strategically emplaced at Aberdeen Proving Grounds, Md., later this year to help defend the National Capital Region from airborne threats. It will be under the control of NORAD-U.S. Northern Command, and operated by soldiers of the U.S. Army’s A Battery, 3rd Air Defense Artillery.

A second JLENS system is in strategic reserve, ready to be deployed anywhere in the world at the request of combatant commanders, should they require comprehensive cruise missile defense.