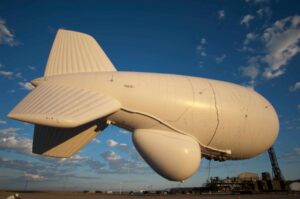 Should the U.S. or its allies need enhanced protection against cruise missiles, hostile airplanes, sea-borne threats or unmanned aircraft, military commanders will have a new system at their disposal. Raytheon Company (NYSE: RTN) has finished preparing a blimp-borne radar system previously used for testing, for use as a rapidly deployable strategic asset.

JLENS is a powerful airborne radar system that floats at altitudes as high as 10,000 feet, suspended from two 80-yard long, helium-filled blimp-like aerostats which are tethered to ground stations via a rugged cable. It helps defend critical assets, population centers and infrastructures against a variety of threats, such as manned- and unmanned- aircraft and missiles.

“By putting JLENS in strategic reserve, the Army is giving combatant commanders around the globe the ability to pick up the phone and, in short order, receive this incredible air defense capability in their area of responsibility,” said Raytheon’s Dave Gulla, vice president of Integrated Defense Systems’ Global Integrated Sensors business area.

The U.S. Army has procured two JLENS systems to date. In addition to keeping one system in strategic reserve, a second system is scheduled to participate in an operational evaluation at Aberdeen Proving Ground, Maryland, in fall of 2014. JLENS completed Early User Testing in the third quarter of 2013, and concluded system design and development in the fourth quarter of 2013.

“JLENS has proven its ability to extend the air-defense umbrella by integrating with our nation’s land-, sea-, and air-based air defenses to detect and intercept threats, such as airplanes, drones and cruise missiles,” said Doug Burgess, Raytheon’s JLENS program director. “The success of this operational evaluation is another significant step forward because it will demonstrate that JLENS has unmatched defensive capabilities. Raytheon is doing its part to get both the Soldiers and the system ready.”

Since JLENS began development in 2005, it has completed a rigorous testing program that included tracking and targeting airplanes and drones, and helping destroy cruise missile targets by integrating with the Patriot Air and Missile Defense System, Standard Missile 6 and AMRAAM defensive systems. JLENS has also tracked threats such as swarming boats, unmanned aircraft, and detected tactical ballistic missiles in their boost-phase.