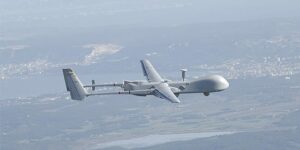 A Harfang UAS belonging to the French Air Force (FAF) controlled by a crew from the French Military Flight Test Centre (Centre d’Expérience Aérienne Militaire), the UAS Squadron “Belfort” (ED 1/33) and the UAS detachment stationed in the Sahel-Sahara region has successfully undergone testing to prove that once it has taken off from its overseas deployment base it can be controlled from a cockpit located in France.

The flight represents a first and proves the “Reachback” concept. With a flight time of around one hour, the experimental flight carried out under operational conditions proved that the UAS piloting functions could be transferred from the cockpit in Niger, where the UAV took off from, to the cockpit in Cognac almost 5,000 km away, and that the main sensor of the UAV could be activated. This new capability enables an increased ISR (Intelligence, Surveillance, Reconnaissance) capacity without leaving national territory, should it be required in the theatre of operations. The current Harfang fleet consists of four UAVs and three ground stations.

Harfang (the French word for “arctic snowy owl”) is a Medium Altitude Long Endurance (MALE) UAS developed for the FAF. The French defence procurement agency DGA recently signed a contract with Airbus Defence and Space and Israel Aerospace Industries (IAI) for the upgrade of the FAF’s Harfang fleet, as well as for its on-condition maintenance until the end of 2017.

Harfang – which is based on the IAI Heron platform – is a combat-proven Intelligence, Surveillance, Target Acquisition and Reconnaissance (ISTAR) system in the MALE UAS category that is designed for reconnaissance and in-depth tracking operations in the battlefield.

It is equipped with optronic sensors and radar, which ensure that missions can be carried out around the clock in all weather conditions. Thanks to its long endurance capability, the UAS is capable of transmitting data in real time to national and international joint command structures. The programme is led by Airbus Defence and Space in close cooperation with IAI, which developed and constructed the aerial platform as well as a number of subsystems.

The Harfang UAS has been successfully operated since November 2008 by the ED 1/33 Belfort of the FAF, which is stationed at the Cognac 709 air base in south-west France. For three years (2009-2012), Harfang was deployed in Afghanistan to support the ISAF (International Security Assistance Force) troops. Deployed at the US base in Bagram, the Harfang system has performed 600 missions and clocked up around 5,000 flight hours. In 2011, Harfang was also deployed at the Sigonella base in Italy as part of the Harmattan operation conducted in Libya.

More recently, the Harfang UAS has been used in several French operations in the Sahel region in Africa, notably since January 2013 in Operation Serval in Mali. During its 15-month deployment at the Niamey base in Niger, Harfang clocked up more than 3,500 flight hours in 250 missions. In February 2014, Harfang passed the symbolic mark of 10,000 flight hours, which it clocked up in over 900 missions for the FAF.

Additionally, the Harfang system was granted military type certification in 2010 by the DGA. Thanks to this certification, the versatile system has since been used in regular operations over French national territory, for instance during FAF operator training in Cognac and for internal security purposes during major national events, such as the Bastille Day military parade, and international events, for example the G8 Summit, and, more recently, the D-Day anniversary ceremonies in Normandy.