general-atomics-aeronautical-systems News By Caroline Rees / 27 May 2014 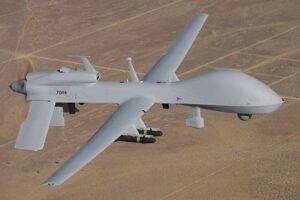 During the flight, IGE demonstrated its ability to carry an external signals intelligence (SIGINT) pod on one wing and two Hellfire missiles on the other. The flight test was funded by the Army’s Product Office for Medium Altitude Endurance (PM-MAE) UAS and was a significant milestone for the Improved Gray Eagle program, proving the validity of the aircraft’s endurance claims in this specified payload configuration. IGE’s first endurance flight occurred in October 2013, when the UAS flew over 45 hours in a Reconnaissance, Surveillance, and Target Acquisition (RSTA) configuration, with no external payloads integrated.

Following this test, IGE will receive software updates that will allow its operation from the U.S. Army’s One System Ground Control Station (OSGCS) and future Universal Ground Control System (UGCS). The Army plans to flight test the upgrade this summer.

An updated version of the U.S. Army’s Gray Eagle, IGE was developed by GA-ASI on Internal Research and Development (IRAD) funds, with its maiden flight taking place last July. In addition to the prototype aircraft currently undergoing flight test evaluation, the company has committed to manufacturing an additional “production first article” aircraft.

IGE has a Max Gross Takeoff Weight (MGTOW) of 4200 pounds, utilizing the 205HP Lycoming DEL-120 engine. The aircraft’s deep belly design and 500- pound centerline hard point allows for 850 pounds of internal fuel load, with an optional external fuel pod that can accommodate an additional 450 pounds. Use of this extra fuel would allow for RSTA missions in excess of 50 hours.