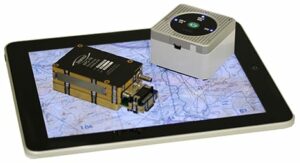 The product increases safety of drone operations by allowing Air Traffic Control (ATC), nearby aircraft, and third party personnel to track unmanned aerial systems (UAS) with standard commercial off-the-shelf (COTS) equipment. Last December the FAA announced six UAS Test Sites to help ensure the safe integration of UAS with NextGen technologies into the nation’s airspace. The Tracker Kit is very affordable, and will be especially helpful to users at these sites.

“The Tracker Kit is very intuitive and easy to use,” said Eric Folkestad, of Arcturus UAV and President of Association for Unmanned Vehicle Systems International (AUVSI) Cascade Chapter. “It lets us use NextGen ADS-B to track our aircraft on the iPad, and we see other airplanes transiting the area as well, which are exactly the ones we need to avoid. This product is key to safety.” 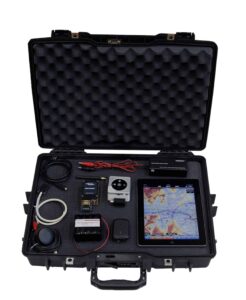 Providing for safe operation of UAS in the National Airspace System (NAS) is a critical FAA milestone mandated by Congress which will allow migration of missions characterized by the 3-Ds: dirty, dull or dangerous from manned aircraft to drones. “Even today, the recent news helicopter mission that ended tragically in Seattle Center could easily have been flown by a 40lb UAV like ScanEagle, Aerosonde, Puma, or Arcturus,” said Kelvin Scribner, Sagetech President, who has thousands of hours piloting helicopters. “Our transponder products are uniquely small enough for these tiny UAVs, allowing their use to increase public safety. A 40lb UAV presents far less risk than the thousands of pounds of metal and jet fuel that comprise a typical helicopter.”

The Tracker Kit is available for sale this spring at www.SagetechCorp.com/Tracker and will be demonstrated at Sagetech’s booth #928 at the AUVSI Conference (May 13-15) in Orlando, Florida.