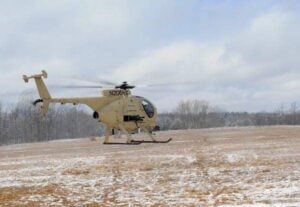 Autonomy options for the Marines have taken a major step forward, as officials at the Office of Naval Research (ONR) have announced two successful helicopter flight demonstrations with unmanned flight capability at Marine Corps Base Quantico, Va., part of the Autonomous Aerial Cargo/Utility System (AACUS) program.

AACUS will enable the Marine Corps to rapidly resupply forces on the front lines using cutting-edge technology sponsored by ONR. The system consists of a sensor and software package that will be integrated into rotary wing aircraft to detect and avoid obstacles in unfavorable weather conditions, or to enable autonomous, unmanned flight. The capability will be a welcome alternative to dangerous convoys, manned aircraft or air drops in all weather conditions.

“This is a giant leap in autonomous capabilities for our Marines,” said Chief of Naval Research Rear Adm. Matthew Klunder. “Imagine a Marine unit needing more ammunition and water where a helicopter crew would be in peril trying to fly in, either from weather or enemy fire.

“With AACUS, an unmanned helicopter takes the supplies from the base, picks out the optimal route and best landing site closest to the warfighters, lands, and returns to base once the resupply is complete-all with the single touch of a handheld tablet.”

The need for this capability surfaced during Marine Corps operations in Afghanistan and Iraq, experts say. Cargo helicopters and resupply convoys of trucks bringing fuel, food, water, ammunition and medical supplies to the front lines frequently found themselves under fire from adversaries, or the target of roadside bombs and other improvised explosive devices.

The AACUS technology is designed to be simple to use; an operator with minimal training can call up the supplies needed and order the flights using only a handheld tablet. In the demonstration tests at Quantico, a Marine with no prior experience with the technology was given a handheld device and 15 minutes of training.

The Marine was able to quickly and easily program in the supplies needed and the destination, and the helicopters arrived quickly-even autonomously selecting an alternative landing site based on last-second no-fly-zone information added in from the Marine.

“This technology truly opens up new unmanned operations capabilities,” said Max Snell, the AACUS program manager. “In the most immediate sense, AACUS will enable safer resupply for the warfighter and save pilots’ lives. Down the road, as the technology develops, it could be used for casualty evacuation, bringing supplies to first responders in disaster areas, and more.”

The technology enables the manned or unmanned rotary wing aircraft to detect and avoid obstacles like telephone wires, large objects on the ground and even a vehicle or other object that has appeared since the initial landing site was chosen by AACUS.

Officials say the five-year effort represents a leap-ahead technology for the Marine Corps and Navy, moving autonomous flights far beyond the current standard which requires a specialized operator to select a landing site and manually control an unmanned aircraft via remote.