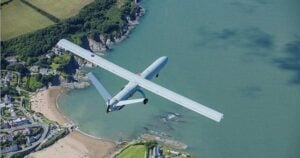 Watchkeeper, the unmanned aircraft system (UAS) developed by Thales for the British Army, has been given a Release To Service by the UK’s Ministry of Defence (MOD).

Watchkeeper is the first UAS to be awarded a full Release To Service (RTS), and is the only UAS of its type allowed to fly in UK airspace. The RTS follows rigorous safety and airworthiness reviews to ensure the system can be operated safely by the British Army. It will support British Army operations by allowing training on the system in the UK.

Watchkeeper is a high-performance, multi-sensor, all-weather UAS that can remain airborne for more than 16 hours in a single mission. The tactical UAS will be deployed by the British Army for life-saving surveillance and intelligence capabilities in support of military operations and is unarmed.

Crucially, Watchkeeper is certified to the same safety standard as manned aircraft.

The RTS moves the Watchkeeper programme from the testing and evaluation phase – previously undertaken by Thales operators in the approved test airspace near Parc Aberporth, West Wales – to full flight training for British Army operators.

It follows the announcement (24 February) that the British Army will begin training flights from Boscombe Down, Wiltshire.

The RTS will allow army crews to fly sorties in segregated airspace, integrating with the military exercises taking place on Salisbury Plain.

Lt Col Craig Palmer of the British Army said, “The safety bar for Watchkeeper has been set very high. The detailed reviews and testing of the whole system have provided significant evidence that the system is maturing rapidly; sufficiently enough to support an RTS recommendation.”

“The process of achieving RTS and the other certifications required for Watchkeeper has been ground-breaking, not only for Thales but also for the MOD and the MAA”, said Victor Chavez, CEO of Thales UK. “Much painstaking work has been required by all parties to deliver the comprehensive and rigorous certification, but our collective achievement is a great one: the first tactical UAS allowed to fly in UK airspace.

“This is a hugely significant moment in the history of unmanned aircraft systems in the UK, and indeed around the world. Watchkeeper is more than an aircraft. At the heart of the system is the revolutionary radar sensor, developed by Thales engineers in the UK and France, which offers unmatched performance for its size and weight. We now look forward to seeing the British Army using this world-leading capability in active service.”