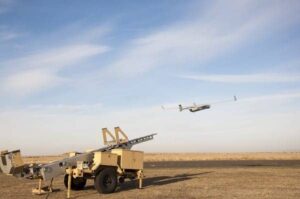 “Receiving the first production-level Blackjack is a great accomplishment for our government and industry team,” said Col. James Rector, program manager for the Navy and Marine Corps STUAS program office, who oversees the RQ-21A program. “It is a very capable system that will meet the needs of our warfighters deployed on land or at sea with our Marine expeditionary units.”

Air Test and Evaluation Squadron (VX) 1 is conducting ground and shipboard testing on Blackjack for the next several months. After completing IOT&E, the government and Insitu team will transition the system to Marine Unmanned Aerial Vehicle Squadron (VMU) 2, located at Marine Corps Air Station Cherry Point, N.C. for operational use. A second LRIP lot, consisting of one system, is scheduled for delivery in the spring.

Lt. Col. Anthony Bolden, commanding officer for VMU-2, said the myriad of capabilities that come with the introduction of Blackjack will provide the Marine Air-Ground Task Force (MAGTF) with a platform that has the payload and persistence to significantly enhance situational awareness.

“RQ-21A brings a new level of flexibility and expeditionary capability not present in any UAS to date,” Bolden said. “As a result, having and operating the Blackjack will posture the Marine UAV squadrons at the forefront of MAGTF operations.”

At eight feet long and with a wingspan of 16 feet, Blackjack provides intelligence, surveillance, reconnaissance and communications relay to the warfighter on land and at sea. The air vehicle’s open-architecture configuration can integrate new payloads quickly and can carry sensor payloads as heavy as 25 pounds.