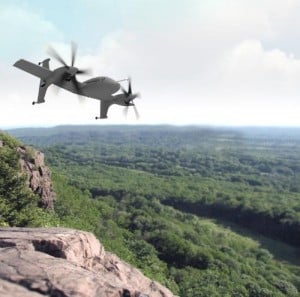 Sikorsky Innovations, the technology development organization of Sikorsky Aircraft Corp., has announced it has won a contract for Phase 1 of the Vertical Take-Off and Landing Experimental Aircraft (VTOL X-Plane) program by the U.S. Defense Advanced Research Projects Agency (DARPA).

The proposed effort is valued at $15 million to develop the preliminary design for the VTOL X-Plane, a high-speed vertical takeoff-and-landing aircraft with the hover capability of a helicopter. Sikorsky Aircraft Corp. is a subsidiary of United Technologies Corp.

Sikorsky Innovations is teamed with Lockheed Martin’s Skunk Works® for the VTOL X-Plane development of its Unmanned Rotor Blown Wing concept. The Rotor Blown Wing represents a unique integration of fixed wing aerodynamics and advanced rotor control to provide a low complexity configuration capable of meeting the challenging DARPA program goals. The contract duration is 22 months. The program goal is to build and fly a demonstrator aircraft with first flight anticipated in the fourth quarter of 2017.

Sikorsky Innovations plans to lead the program from its Fort Worth office, leveraging talent from both Stratford, Connecticut, and West Palm Beach, Florida, engineering centers.

The overall VTOL X-Plane program is a 52-month, $130 million effort to fly an experimental aircraft capable of exceeding 300 kt., with a hover efficiency of 75 percent or better and a cruise lift-to-drag ratio of 10 or more. During Phase 1, Sikorsky Innovations and Lockheed Martin’s Skunk Works will conduct trade studies and develop the initial design.

“Sikorsky has a solid legacy of developing game-changing advances, and the DARPA X-Plane program is exactly the kind of project that Sikorsky Innovations was created to execute,” said Chris VanBuiten, Vice President of Sikorsky Innovations. “We are an agile, networked team dedicated to demonstrating innovative solutions to the toughest challenges in vertical flight. This program explores a generation of innovation that has yet to be introduced, and we have the opportunity to develop our novel design of the X-Plane concept with our partner at Skunk Works. It is an exciting project, and we are thrilled to be among the contract winners.”

Mark Miller, Sikorsky’s Vice President of Research & Engineering, added, “We anticipate that DARPA will release up to four Phase 1 awards, so this is a significant win for Sikorsky Innovations. We have a non-traditional technical solution, and this is an opportunity for Sikorsky Innovations to excel, to expand our relationship with DARPA, and to embark on a great partnering opportunity with another company known for its innovative solutions – Lockheed Martin’s Skunk Works.”

Sikorsky and Lockheed Martin have extensive experience working together during four decades developing, delivering and supporting 600 operational SH-60B and MH-60R/S maritime helicopters to the U.S. Navy. In addition, Sikorsky and Lockheed Martin have teamed up to offer Sikorsky’s proven S-92® helicopter in response to the U.S. Navy’s formal Request for Proposals to build the next Marine One helicopter fleet, as well as teaming for the U.S. Air Force Combat Rescue Helicopter.