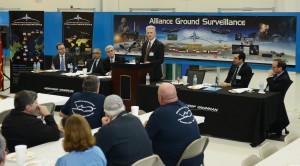 NATO representatives, state dignitaries, community leaders and Northrop Grumman employees gathered to celebrate the start of production for the first of five aircraft. The system will provide NATO with unprecedented near real-time terrestrial and maritime situational awareness information throughout the full range of NATO military and civil-military missions, including peacekeeping and humanitarian relief operations. The NATO AGS system will be a major contribution to NATO’s joint intelligence, surveillance and reconnaissance (ISR) capability.

“The variety of sensors and ability to support a wide range of missions will revolutionize how NATO collects ISR,” said Jim Edge, general manager, NATO AGS Management Agency. “It was an honor to witness the start of production for the first NATO aircraft, and I’m excited at being one step closer to delivering the AGS system.”

“Mississippi excels at advanced manufacturing, and the sophisticated aircraft that will be built at Northrop Grumman’s Moss Point facility are a testament to the quality of the area’s workforce,” Gov. Phil Bryant said. “Our state is also building a strong presence in the aerospace industry, and this operation will certainly bolster our reputation.”

The NATO AGS system also includes European-sourced ground assets that will provide in-theater support to commanders of deployed forces. Mobile and transportable ground stations will provide an interface between the AGS core system and a wide range of interoperable NATO and national command, control, intelligence, surveillance and reconnaissance systems.

The NATO Alliance Ground Management Agency awarded the prime contract for the system to Northrop Grumman in May 2012 during the NATO Summit. The company’s primary industrial team includes EADS Deustchland GmbH (Cassidian), Selex ES and Kongsberg, as well as leading defense companies from all participating nations.

The NATO AGS system is a variant of the combat-proven Global Hawk, which has logged more than 100,000 flight hours and has supported operations in Iraq, Afghanistan and Libya. The system has also collected weather data in support of scientific missions and participated in humanitarian relief efforts after the devastating natural disasters in Haiti, Japan and the Philippines.