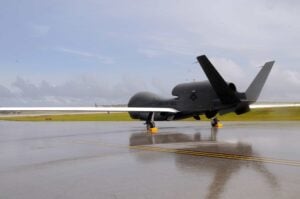 This contract provides for advance procurement of long lead items associated with three Block 30 aircraft, including three enhanced integrated sensor suites, three airborne signals intelligence payload (ASIP) and two ASIP retrofit kits to be installed on previously purchased aircraft. Work under this contract is expected to be completed in 2015.

“Global Hawk’s ability to fly more than 30 hours at high altitudes while gathering multiple types of intelligence data makes it extremely valuable to field commanders who need near real-time information,” said George Guerra, Northrop Grumman’s vice president for Global Hawk UAS. “This award is especially important because it reaffirms the Air Force’s commitment to this safe and cost-effective system, which has been supporting our warfighters for more than 15 years in the U.S. and abroad.”

Combined with Global Hawk’s ability to fly for long periods at altitudes up to 60,000 feet, the aircraft’s 12,300 nautical mile range makes the system ideally suited to take on many different ISR missions.

Global Hawk can carry a variety of ISR sensor payloads that allow military commanders to gather imagery, use radar to detect moving or stationary targets on the ground, and provide airborne communications and information sharing capabilities to military units in harsh environments.

The UAS has logged more than 100,000 flight hours and has been used over battlefields in Iraq, Afghanistan and Libya. The system has also supported ISR efforts following the devastating earthquakes that struck Haiti and Japan.

In addition, NASA has been using Global Hawks for scientific and environmental research, recently flying over two hurricanes in September 2013 as part of a broader project studying how tropical storms develop over the Atlantic Ocean.