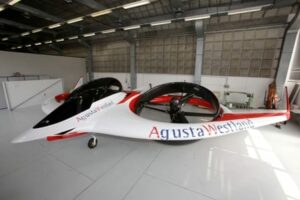 Wind River has announced that AgustaWestland is using the VxWorks® 653 Platform for its revolutionary “Project Zero” tilt rotor technology incubator.

“A testament to the power of open standards in aerospace systems, VxWorks 653 is used in over 300 programs, by over 165 customers and on over 60 aircraft”

“Project Zero” is an unmanned all-electric tilt rotor, designed to hover like a helicopter and convert to a fixed wing aircraft in forward flight, giving insight into the future of advanced rotorcraft. AgustaWestland’s technology incubator is the result of close collaboration between Finmeccanica companies, including Selex ES, which contributed to the starting phases of the project, its implementation, and ultimately to its acceptance. Selex ES has designed and manufactured entirely new units such as: the Navigation Sensor Unit (NSU) and the Flight Control Computer (FCC), elements that are key to the avionics of Project Zero.

“Wind River’s proven solutions for avionics combined with its professional services expertise contributed to the development of Project Zero in record time with an innovative approach by leveraging market-leading technology,” said Dr. James Wang, vice president of research and technology at AgustaWestland. “Wind River technology was selected because of its hard real-time, portability, reusability and robustness characteristics, and the company’s strong ecosystem helped us to save tremendous time in the development process.”

“A testament to the power of open standards in aerospace systems, VxWorks 653 is used in over 300 programs, by over 165 customers and on over 60 aircraft,” said Chip Downing, senior director of aerospace and defense at Wind River. “It is gratifying to know that Wind River products and services have enabled the development of yet another revolutionary unmanned vehicle, making it extremely easy to modify the system in order to support changes in customer requirements without impacting the overall robustness of the solution.”

For more than three decades, Wind River has been a trusted advisor in the development of safety and mission-critical products. The company’s reliable and secure software has served as a key technology for countless autonomous systems around the globe, including the Mars Science Laboratory rover Curiosity, Northrop Grumman X-47B, unmanned aircraft, CIRA’s FTB-1 reusable unmanned spacecraft, and the nEUROn Unmanned Combat Air Vehicle demonstrator, among others.