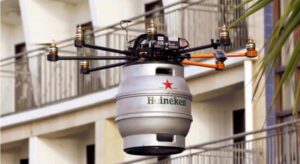 UK aerial film production company, Out Filming, has produced a promotional video for a beach-front bar using a quadcopter and octocopter. During the film the quadcopter is used to deliver a single bottle of beer to a beach-goer, before the larger octocopter delivers a whole keg.

The company’s DJI F450 quadrotor was used for the first beer bottle drop, which had two small servos with cam rotors installed underneath to act as the catch and release mechanism for the beer bottle. The bottle was hung underneath the craft and flown over the actor and then released, and it worked seamlessly.

The video can be viewed below, along with a ‘The Making of’ video which explains how the team achieved the shoot. For more information about Out Filming visit www.outfilming.com