“The RF-7850A will allow international forces on the ground and in aircraft to exchange real-time information through interoperable voice, video, images and other ISR applications,” said Brendan O’Connell, president, International Business, Harris RF Communications. “With more information in hand, air crews will be able to respond quickly and appropriately, resulting in improved mission success.” 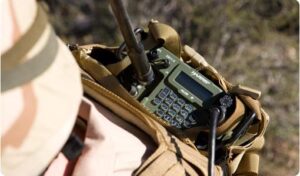 The New RF-7850 is fully interoperable with the Falcon II® and Falcon III® families, including wideband radios such as the RF-7800M (pictured)

The RF-7850A is designed for ease-of-use as a seamless extension of the Harris Falcon family of tactical radios, which are deployed widely around the globe. The radio comes with a simple user interface and embedded applications. It is fully interoperable with all members of the Falcon II® and Falcon III® families, including wideband radios such as the RF-7800M. For wideband networking, the RF-7850A includes the Harris Adaptive Networking Wideband Waveform (ANW2) and the new Time Division Multiple Access (TDMA) Networking Waveform.

Harris introduced the radios in two configurations to provide the ideal solution over existing systems for the widest variety of platforms in support of multiple missions. The RF-7850A-UA is a lightweight, single-channel radio for use with unmanned aerial systems for applications, such as rapid data transmission from ISR platforms to air and ground forces as well as range extension for ground tactical networks. The RF-7850A-MR is a multiband dual-channel radio for use in helicopters and fixed-wing aircraft with significant size, weight and power advantages over current solutions. The RF-7850A-MR provides two independent channels in the same physical space as traditional single-channel solutions, easily integrates with airframe intercom systems and provides cross-banding capabilities for bridging disparate radio networks.