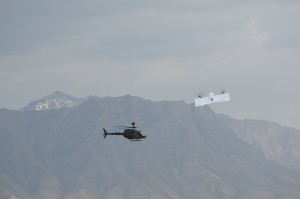 Deployment of Skate® to support operations in Afghanistan is sponsored by the Air Force Research Laboratory (AFRL).

Initial assessment of Skate’s performance by military operational commanders has been exceptionally positive. They stated that Skate® provides an “incredible capability” and “is very user friendly”, providing outstanding situational awareness of potential threats. Combat and security teams both noted that Skate® “launched flawlessly”, was “very maneuverable”, and is “a mandatory requirement for operations due to its effectiveness”.

Skate® is a man-packable, intelligence, surveillance, and reconnaissance (ISR), target acquisition/asset designed for operation by small tactical units requiring airborne surveillance. Skate’s unique thrust-vectoring system and near vertical take-off and landing flight envelope provides covert launch and recovery capability for use in tight, confined spaces. Skate® can be launched and controlled from a moving vehicle, a building window, or an observation tower. It can also be launched and recovered from the top of a small building or platform. Its Global Positioning System enabled ground control system/remote video terminal provides autonomous overwatch capabilities for moving patrols and security elements. Skate® is a force multiplier that provides the warfighter with eyes-on-target for real-time situational awareness.