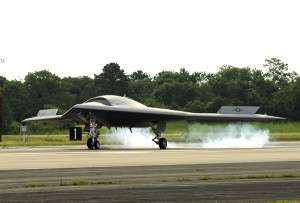 The X-47B, known as Salty Dog 502, was temporarily at Wallops following two successful arrested landings on USS George H.W. Bush (CVN 77) July 10. The unmanned aircraft diverted to the NASA facility on the third landing attempt when a minor error was detected in one of its three navigation computers.

“This was the first time the X-47B was operated at a divert site and proved to be a great real-time learning event for the test team,” said Capt. Jaime Engdahl , Navy UCAS program manager. “Our team worked closely with NASA personnel over the past few weeks to coordinate the return flight to Pax River.”

The two X-47B air vehicles will reside at Patuxent River while the Navy UCAS program continues to assess potential opportunities for additional test operations here and at-sea. These efforts will focus on reducing risks for the follow-on Unmanned Carrier Launched Airborne Surveillance and Strike (UCLASS) program and help the Navy to better understand how to operate unmanned systems of this size in the areas of research and development, said Rear Adm. Mat Winter , who oversees the Program Executive Office for Unmanned Aviation and Strike Weapons.