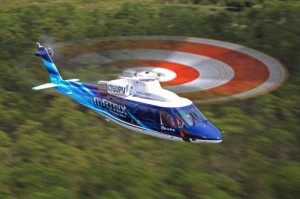 Sikorsky Aircraft, a subsidiary of United Technologies Corp., has unveiled a major research program — designated MATRIX™ Technology — to develop, test and field systems and software that will significantly improve the capability, reliability and safety of flight for autonomous, optionally piloted, and piloted vertical take-off and landing (VTOL) aircraft.

In collaboration with the United Technologies Research Center, MATRIX Technology aims to give both rotary and fixed wing VTOL aircraft a high level of system intelligence needed to complete complex missions with minimal human oversight, and at low altitudes where obstacles abound.

“VTOL pilots increasingly will become mission managers, either on the aircraft or when monitoring from the ground via datalink, because they will feel comfortable letting the aircraft fly itself,” said Mark Miller, Sikorsky’s Vice President of Research & Engineering during the AUVSI Unmanned Systems trade show where MATRIX Technology was unveiled.

“The game-changing MATRIX Technology we are developing and testing will provide order-of-magnitude improvements in system intelligence and contingency management to ensure high levels of reliability, and ultimately make unmanned missions by helicopters and VTOL aircraft of all sizes highly affordable.”

The MATRIX Technology program is spearheaded by Sikorsky Innovations, the same rapid prototyping organization that in 2010 proved the physics of efficient 250-knot flight in a rotorcraft with the X2 Technology® Demonstrator program.

For its autonomy initiative, Sikorsky Innovations has acquired and outfitted an S-76® commercial helicopter with fly-by-wire controls to act as a flying lab. Called the Sikorsky Autonomous Research Aircraft (S.A.R.A.), it will enable rapid flight testing of software and hardware, including multi-spectral sensors, previously integrated in the systems integration labs at Sikorsky’s Stratford, Conn., headquarters. When not in flight, S.A.R.A. can be configured as its own simulator to develop and test autonomy software and hardware.

The S.A.R.A. aircraft performed its first autonomy flight with MATRIX Technology July 26. For the early flight test work, a safety pilot will remain aboard the aircraft. Through the end of 2014, the program has set rigorous key performance parameters (KPPs) that will test and refine software apps and complex algorithms. KPPs include demonstrating safe flight in obstacle rich environments, shipboard and brownout condition landings, and cargo transport using an optionally piloted fly-by-wire BLACK HAWK helicopter. Beyond 2014, the program will continue to tackle new challenges, and address customer requirements that further advance autonomy capability for VTOL aircraft.

“MATRIX Technology addresses the unique needs of vertical flight systems,” said Miller. “By our efforts we seek to expand the types of missions that can be flown, improve the efficiency of existing missions and continue to build on the safety and reliability that has been a Sikorsky hallmark.”