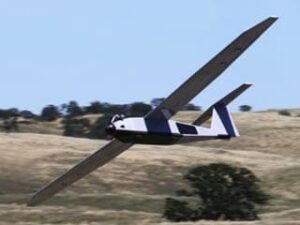 The Arcturus T-20 Unmanned Aerial Vehicle flew to an altitude of 23,500′ MSL during a training flight at Camp Guernsey Joint Training Center, Wyoming. The previous altitude record for the T-20 was 15,000 MSL set at Edwards AFB California. No special modifications to the aircraft were needed. The T-20 UAV was catapult launched and landed safely after the 8-hour flight. Another high altitude flight with second T-20 was also successful, reaching the top of the restricted military airspace.

A team of pilots, controllers and engineers from the manufacturer, Arcturus-UAV, were allowed to take the T-20 to the record altitude as part of an acceptance test for a new fleet of aircraft.

Manufactured in the USA, the T-20 is a runway independent, Tier II class, small tactical unmanned aerial vehicle. The primary mission of the T-20 is intelligence, surveillance and reconnaissance. Typical missions include aerial mapping, drug interdiction, border patrol, force protection, search and rescue, as well as military ISR. The T-20 is also being studied for use in fighting wild fires.

The T-20 payload consists of a gimbal sensor that provides full motion video from daylight and infrared cameras. Video is transmitted by secure data link to mission commanders on the ground. An onboard GPS autopilot with waypoint navigation accepts multiple flight plans from the Ground Control Station, allowing the T-20 to fly missions up to 16 hours, and return to a specified location autonomously. The T-20 is powered by a 190cc an air-cooled, four-stroke, fuel injected engine. Carbon fiber composite construction used in the T-20 airframe allows the UAV to carry payloads up to 65 lbs.