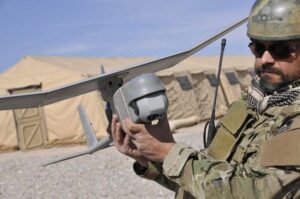 AeroVironment, Inc. have announced that on August 13, 2013 the company received a $13,487,240 order from the United States Army. The order – the final portion of a contract valued at $59.6 million – includes RQ-11B Raven unmanned aircraft systems (UAS), miniature gimbaled payloads and initial spares packages, and is funded from the Army’s fiscal 2012 procurement budget. Delivery of systems, spares and payloads is scheduled for completion by September 15, 2013.

“AeroVironment developed and deployed the Raven system quickly and effectively to support our military forces in a dynamic threat environment,” said Roy Minson, AeroVironment senior vice president and general manager, Unmanned Aircraft Systems. “As a result, the Raven, along with Puma and Wasp, make up the large majority of the Pentagon’s unmanned aircraft fleet. Importantly, however, because of the low cost and efficiency of our solutions, our small unmanned aircraft accounted for less than five percent of total reported United States Department of Defense UAS spending since 2004. We deliver highly effective solutions that improve capabilities for the warfighter at low cost to the U.S. taxpayer.”

Minson added, “In addition to serving United States warfighters, we have also expanded our small UAS to 24 international military forces. Looking ahead, AeroVironment continues to focus on innovation and post-sale support to ensure that our customers maintain their battlefield advantage.”

About AeroVironment’s Family of Small UAS:

RQ-11B Raven®, RQ-12 Wasp AE™, RQ-20A Puma™ and Shrike VTOL™ comprise AeroVironment’s Family of Small Unmanned Aircraft Systems. Operating with a common ground control system (GCS), this Family of Systems provides increased capability to the warfighter that can give ground commanders the option of selecting the appropriate aircraft based on the type of mission to be performed. This increased capability has the potential to provide significant force protection and force multiplication benefits to small tactical units and security personnel. AeroVironment provides logistics services worldwide to ensure a consistently high level of operational readiness and provides mission services for customers requiring only the information its small UAS produce. AeroVironment has delivered thousands of new and replacement small unmanned air vehicles to customers within the United States and to more than twenty international governments.

The Qube™ small UAS is tailored to search and rescue, first response, law enforcement and other public safety missions. Small enough to fit easily in the trunk of a car, the Qube system can be unpacked, assembled and ready for flight in less than five minutes, giving the operator a rapidly deployable eye in the sky at a fraction of the cost of manned aircraft and large unmanned aircraft.