ScanEagle UAS to be Deployed by Royal Navy for ISR Operations 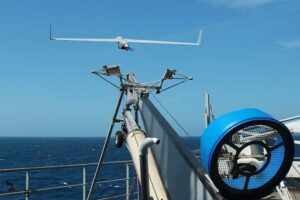 ScanEagle is a maritime reconnaissance asset that can be launched off the back of Royal Navy and Royal Fleet Auxiliary ships day or night to gather intelligence and survey the wider area of operations.

Built by Insitu, a subsidiary of Boeing Defence UK Limited, the ScanEagle is the first maritime-specific unmanned air system capability to be delivered in support of UK naval operations.

It will complement the existing intelligence, surveillance and reconnaissance assets used on operations such as helicopters and long-range radar.

The unarmed aircraft, which has a wingspan of just over 3 metres and weighs 22 kilograms, is launched from ships into the sky by a pneumatic catapult.

Flying at about 60 knots, it is commanded by a specialist team on board the ship who will plan the ScanEagle’s missions, control its flights and monitor and analyse the information it gathers using its state-of-the-art sensors.

At the end of its flight, the ScanEagle is recovered back to the ship.

“ScanEagle represents an important addition to the Royal Navy’s intelligence, surveillance and reconnaissance capability. Its ability to deploy during the day and night, coupled with the technology it uses, will give commanders a clearer picture of the operational situation whenever it’s required.”

“ScanEagle provides the Royal Navy with proven surveillance capability that has already been used on operations by other nations, so we know we are getting top quality equipment. The technology is off-the-shelf and will be available to the Royal Navy as soon as possible.

“Our continued investment in intelligence, surveillance and reconnaissance systems is essential to keeping our Armed Forces up-to-date with the latest capabilities and this will be a central part of MOD’s investment in new equipment over the next 10 years.”