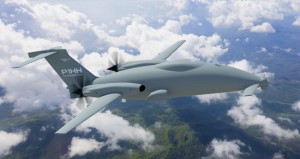 The P.1HH HammerHead technological demonstrator was designed and built in less than one year and it has already successfully completed low speed taxi tests demonstrating Piaggio Aero’s ability to deliver an efficient UAV platform integrating the state of the art Selex ES SkyISTAR Mission Management system.

The P.1HH “HammerHead” development program proceeds with the demonstration/validation phase through an extensive campaign of laboratory and ground tests aimed at supporting the first flight. After the first engine start and the runway taxi that took place on February 14 2013 at an Italian Air Force base, the programme has now entered the final phase of test where, the aircraft systems in flight configuration will be tested at all levels in accordance with the build-up approach taken on the UAS.

On June 12th 2013, the Vehicle Control Management System (VCMS) was successfully tested on board the aircraft through remote control. The test demonstrated the UAV’s fully autonomous engine control capability, normal and auto brake features as well as complete control of all ground handling.

The VCMS – which commands the aerodynamic control surfaces and manages the on-board equipment with a triple redundancy Flight Control Computer system and multiple remote Servo Interface Units – has been extensively tested in an Iron Bird environment. The ground test campaign has been supported by a dedicated engine test rig, while the integration and verification of the servo actuation system and its protective features have been performed in a closed loop to demonstrate the robustness of the adopted technical solution. The test campaign will proceed with both ground and flight envelope expansion to achieve flight readiness status of the P.1HH HammerHead prototype.

Heading the unveiling ceremony Alberto Galassi Chief Executive Officer of Piaggio Aero said: “I’m really proud to unveil together with our shareholders and partners in front of the entire aviation community the P.1HH HammerHead Unmanned Aerial System, and to be able to provide an insight into what an advanced UAS of the future will look like. The P.1HH HammerHead and the MPA Multirole Patrol aircraft are the most challenging and technologically advanced aviation programme that Piaggio Aero has ever conceived. They support Piaggio Aero in its newly declared vision of becoming a prominent player in the surveillance and security sector producing leading edge Unmanned Aerial Systems and Multirole Patrol Aircraft together with our world recognized state of the art business aviation aircraft”.

Fabrizio Giulianini, CEO of Selex ES added “Selex ES the only European company today that is able to offer the full UAS spectrum of capabilities, from the platform to the sensors to mission management” has said Fabrizio Giulianini adding: “Bringing together Piaggio Aero’s proficiency in aerial platforms and Selex ES’s capability in Intelligence, Surveillance and Reconnaissance systems, the P.1HH HammerHead UAS programme represents a highly innovative and ready to market solution to deliver to worldwide customers operational sovereignty and reliable performances”.

P.1HH HammerHead, is suited for a wide range of ISR, Defense and Security missions, and defines a new standard in mission role flexibility while setting a new frontier of CONcept of OPerationS (CONOPS) for Defense. Responsible for the P.1HH’s Mission System, Selex ES will deliver effective and flexible scenario planning, simulation and concepts of operations (CONOPS).

The design of the P.1HH HammerHead aims to be a unique ISR platform, able to climb up to 45.000 feet, loitering quietly at low speed (135 KTAS) with an endurance of up to 16 flight hours and capable of deploying at very high speed – up to 395 KTAS – to targets. Its capabilities include being able to host several payload combinations and to perform multiple missions: aerial, land, coastal, maritime and offshore security, COMINT/ELINT, electronic warfare as well as other roles.

The P.1HH HammerHead UAV platform has an aerodynamic configuration similar to the P.180 Avanti II, with its unique patented 3 lifting surface configuration (3 LSC). The high aspect ratio laminar wings have been adapted for the P.1HH HammerHead design by increasing the wing span to sustain larger vehicle masses and allocating a quickly detachable joint to the outer wings for rapid aerial deployment of the UAS in remote areas.

By being based on a certified Mach 0.70 aircraft, the P.1HH HammerHead is the fastest Medium Altitude Long Endurance (MALE) ever designed and the Piaggio Aero UAV is powered by two highly reliable Pratt & Whitney Canada PT6A-66B turbine engines integrated with low noise 5-blade scimitar propellers. The P.1HH HammerHead UAV platform has an aerodynamic configuration largely similar to P.180 Avanti II ; the large but, low drag aircraft fuselage provides capability for aerodynamically effective payload arrangements, with plenty of available volume from the variety of LRU’s equipment, sensors and communication equipment comfortably located inside the expansive aircraft fuselage.

P.1HH HammerHead UAS Mission Management System is based on Selex ES SkyISTAR® innovative technology. Thanks to the modularity of the mission management system and Selex ES’s vast experience in airborne sensors and systems, the company is able to provide a wide selection of payloads which can be seamlessly integrated and aligned with customer’s CONOPS. The P.1HH mission management system is fit for a multirole UAS, allowing the HammerHead to perform missions including but not limited to wide-area territorial & aerial surveillance, maritime patrol, environmental monitoring and electronic warfare. As the provider of the Vehicle Control and Management System (VCMS), the remote-piloting Ground Control Station (GCS), and the UAS’s datalink and communications systems, Selex ES will ensure safe operations during all flight activities, throughout the whole chain of UAS command and control. Due to the high level of functionality and multiple redundancies, the P.1HH UAS is able to perform command and control and data exploitation for multiple UAVs, operations in Line of Sight (LOS) and Beyond-LOS (BLOS) conditions, and flexible asset usage for the pilots and ground crew.

P.1HH HammerHead VCMS features an Automatic Take-Off and Landing (ATOL) system offering dual redundancy external sensors for both reliability and safety. All VCMS LRU’s are installed inside the large volume fuselage, in a very protected, optimized operative environment, in a specific lay-out that provides zonal separation in order to achieve a state of the art operative temperature range, highest VCMS reliability and above all, P.1HH HammerHead safety.

The P.1HH HammerHead design is fully compliant with STANAG USAR 4671 standards to fly in both restricted and unrestricted flight areas, according to the relevant authorities’ permission.