world-surveillance-group-inc News By Caroline Rees / 02 May 2013 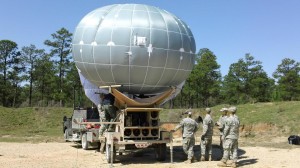 World Surveillance Group Inc., a developer of lighter-than-air aerostats and unmanned aerial vehicles (“UAS”), today announced that, with the support of its wholly owned subsidiary Lighter Than Air Systems Corp. (“LTAS”), the operational team has delivered the second Blimp in a Box(TM) (“BiB”) aerostat system to the U.S. Department of Defense (“DoD”). The delivery included not only demonstrations and testing of the BiB but also additional training sessions for soldiers at the Fort Polk, LA base as the systems are prepared for future military exercises. Formal DoD acceptance of the BiB system was issued following completion of the testing, training and a complete inventory accounting.

WSGI’s and LTAS’ operations were in cooperation with WSGI’s wholly owned subsidiary Global Telesat Corp., who was awarded the contract from the DoD for a set of BiB systems in January 2013. The contract award included on-location support for technical fact gathering, installation and training for the BiB systems. The BiB is a self-contained mobile tactical aerostat system that can be towed from the back of a standard vehicle and is designed to provide semi-persistent, mobile intelligence, surveillance, and reconnaissance (“ISR”) at the platoon level. Each BiB system can provide mobile ISR for days, weeks or months with the aerostat system only requiring a fifteen minute recovery and re-launch and a helium top-off every 24-36 hours.

WSGI President and CEO Glenn D. Estrella stated, “We are proud to have completed the scheduled delivery for the initial set of our BiB systems to the DoD under the terms of the contract and look forward to working closely with our customer as the BiB systems become involved in military exercises. We intend on utilizing all our resources to support our customer as we continue to advance the BiB tactical aerostat system.”