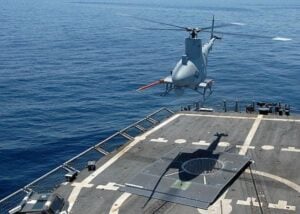 As the Navy’s first operational squadron with both manned and unmanned aircraft, HSM- 35 heralds a new era for Naval Aviation. The squadron, designated the “Magicians,” adopted the call sign of Helicopter Anti-Submarine Squadron Light 35, which was decommissioned on NAS North Island in 1992, after 19 years of service.

“The reestablishment of this squadron is exceptional as it points toward the future for our Naval Aviation forces,” said Commander, Naval Air Forces, Vice Adm. David H. Buss. “The actions today represent a clear line dividing what Naval Aviation once was and what it will be.”

As the next generation submarine hunter and anti-surface warfare helicopter, the MH-60R is the cornerstone of the Navy’s Helicopter Concept of Operations. The Fire Scout (VTUAV) system provides unique situation awareness and precision target support for the Navy, said Buss.

Both new aircraft will embark with the Navy’s new high speed, agile, shallow-draft Littoral Combat Ship (LCS), which was also recently introduced to the fleet.

More than 100 Sailors stood in formation as their unit became an official part of the Navy’s Pacific Fleet Air Forces.

“Today we give birth to our new squadron while celebrating the legacy of our past,” said Hewlett. “We honor all the former Magicians of HSL-35, and will continue in the same spirit of war-fighting excellence to provide extraordinary support to the fleet.”

Sixty former HSL-35 members were in attendance, including one commanding officer, retired Capt. George Powell and an original Magicians’ pilot, retired Capt. Rob Moore. Both shared their enthusiasm about the rebirth of their old squadron.

“I think the reestablishment is awesome, because almost every single unit I was a part of during my time in the Navy has been decommissioned,” said Powell. “But now this squadron is coming back, and I think it’s really neat.”

The Magicians’ first mission, beginning this summer, will be to undergo training and develop guidelines for what will be the Navy’s standards of operation for the expeditionary Fire Scout. According to Buss, the procedures set by the Magicians will chart the course for Naval Aviation’s operating future.