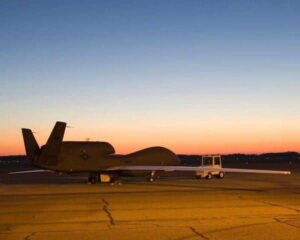 Paul Weinstein, an electronics engineer supporting the Common Standards and Interoperability (CSI) program office, launched an image quality lab in 2012 that will help determine how to effectively employ Triton’s sensors and radars and potentially other manned and unmanned systems.

In preparation for the first Triton image evaluation, Weinstein, a former National Geospatial-Intelligence Agency (NGA) employee, worked with the agency to provide the necessary training, software and image scientists for the first official evaluation of the P-8A aircraft’s Electro-Optical (EO) sensor. Since the P-8A and MQ-4C are part of the Maritime Patrol and Reconnaissance Force family of systems, Weinstein’s team made a decision to evaluate the P-8 first and include test engineers from both programs.

“Paul did an outstanding job getting this image quality assessment capability set up and running,” said Pat Ellis, MQ-4C Triton’s Mission Systems lead. “This will save the Triton program several hundred thousand dollars, since we will not have to submit packages for image ratings to NGA and the Office of Naval Intelligence (ONI) for our imaging systems.”

Without this capability at Pax River, the Navy would have to rely on NGA to perform sensor testing, at a cost of more than $150,000 per evaluation. It would also take more than a month to return the analysis to the team. By having the lab at Pax, each test is virtually free and it takes less than one week to turn around the data to the test team, Weinstein said.

“This level of testing will enable program offices to make smart budget decisions with respect to changes to the current network and current integration measures as well as future integration efforts,” Ellis said.

“We are following the fly-fix-fly philosophy as we figure out solutions that will allow lower bandwidth platforms to send better quality video,” Weinstein added. “We need to understand if a platform can meet its mission and avoid it just flying out and burning fuel.”

The first imagery evaluation for MQ-4C Triton will be conducted after the team has data available from Triton’s first flight, which was conducted May 22 at Northrop Grumman’s facility in Palmdale, Calif. The image-quality lab team will evaluate the MQ-4C’s EO/Infrared (IR) and Synthetic Aperture Radar sensors.

As an adjunct to the manned P-8 aircraft, Triton is intended to provide persistent maritime and littoral ISR data collection and dissemination capability to the fleet.