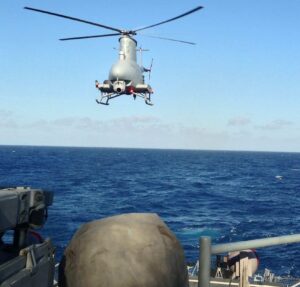 This is the fifth sea-based deployment for the MQ-8B. Fire Scout routinely flies 17 hours per day, while providing a 12-hour real-time Intelligence, Surveillance and Reconnaissance (ISR) orbit to combatant commanders.

USS Bradley received communication upgrades allowing the aircraft’s Full Motion Video (FMV) camera feed to be distributed to the ship’s Combat Information Center (CIC) and to commanders at military installations throughout the world.

“The teams of USS Bradley and HSC-22 have taken Fire Scout and maritime ISR to a new level,” said Capt. Patrick Smith, Fire Scout program manager at Naval Air Station Patuxent River, Md. “They tackled multiple sparing, integration and operational issues. Their perseverance demonstrated the significance of maritime based ISR. Fire Scout continues to be in great demand and is answering the call globally via our shipboard deployments.”

Smith said the team will continue to take lessons learned and provide improvements to future deployments.

“The U.S Navy brings a unique capability to the ISR customer,” said Cmdr. Pete Ehlers, USS Bradley commanding officer. “Fire Scout is a proven technology with greater multi-payload and mission capability than smaller UAVs the Navy operates. We are able to access many areas of interest without adding an undesirable U.S footprint on land.”

Since 2006, the Northrop Grumman-built Fire Scout system has flown more than 8,000 flight hours – with more than half of the flight hours performing real-world operational tasking during ship-based and land-based deployments within the past 18 months.

This deployment also marks the first time that an HSC squadron has deployed with the Fire Scout. Previous deployments have all been conducted by the Helicopter Maritime Strike community.

“I’m extremely proud of our aircraft maintainers and aircrew”, said Lt. Cmdr. Brett Meskimen, HSC-22 officer in charge. “Our active and Reserve Sailors took the lessons from the previous deployments and ran with them. They have set the new standard for future detachments from both communities. We still have a long way to the end of deployment, but it is worth taking a moment to reflect on the hard work and accomplishments of the whole team as they support the needs of the warfare commanders.”