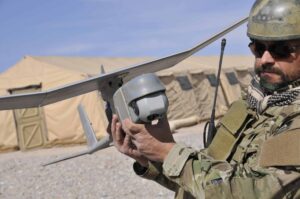 AeroVironment, Inc. has announced it received $13,800,062 of incremental funding on March 30, 2013 from the United States Army for continued performance of a contract action with a not to exceed value of $65,538,759. The order includes RQ-11B Raven systems, new miniature gimbaled payloads and initial spares packages, and is funded from the Army’s fiscal 2012 procurement budget. Delivery of systems, spares and payloads is scheduled for completion by July 25, 2013.

“The proven Raven small unmanned aircraft system continues to serve our soldiers reliably, wherever and whenever they require immediate airborne situational awareness,” said Roy Minson, AeroVironment senior vice president and general manager, Unmanned Aircraft Systems. “Like all our customers, the Army’s needs continue to evolve, and we continue to deliver enhanced solutions to ensure that our troops maintain their battlefield advantage. The Mantis suite of gimbaled payloads is the latest example of a valuable capability enhancement to protect those who protect us.”

The RQ-11B Raven unmanned aircraft system is a 4.5-pound, backpackable, hand-launched sensor platform that provides day and night, real-time video imagery wirelessly to a portable ground control station for “over the hill” and “around the corner” reconnaissance, surveillance and target acquisition in support of tactical units. U.S. armed forces use Raven systems extensively for missions such as base security, route reconnaissance, mission planning and force protection. Each Raven system typically consists of three aircraft, two ground control stations and spares.