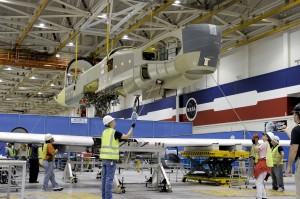 Northrop Grumman Corporation is building a company-owned unmanned aircraft for use as a development and demonstration platform for at-sea surveillance under the U.S. Navy’s MQ-4C Triton program.

Triton provides a detailed picture of surface vessels to identify threats across vast areas of ocean and littoral areas. With its ability to fly missions up to 24 hours, Triton complements many manned surveillance and reconnaissance aircraft.

Wing sections were joined to the aircraft’s fuselage at the company’s production facility in Palmdale, Calif. The aircraft will be outfitted with the same intelligence-gathering sensors and communications suite as the Navy’s Triton program.

“The aircraft will initially be used to further testing efforts for the Navy as we prepare Triton to be operational in late 2015,” said Steve Enewold, Northrop Grumman’s vice president and program manager for Triton. “Eventually, we will use the aircraft as a test bed to improve system performance, incorporate new intelligence-gathering capabilities and conduct demonstrations.”

All production efforts related to this system were funded internally by the company. Northrop Grumman has also built other company-owned unmanned systems such as Fire Scout, using them to demonstrate new control software and sensor payloads.

“We’ve proven that company-owned systems allow us to reduce risk in testing efforts and deliver capabilities faster to our customers,” said Enewold.