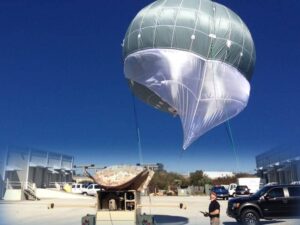 The Blimp in a Box™ Aerostat System

World Surveillance Group Inc., a developer of lighter-than-air unmanned aerial vehicles and related technologies, has announced that its wholly owned subsidiary, Global Telesat Corp. (“GTC”), has been awarded a $605,000 contract from the United States Department of Defense for a set of Blimp in a Box™ (“BiB”) aerostat systems. The contract award includes on-location support for technical fact gathering, installation and training for the BiB systems. The BiB systems will be delivered to an army base where they are intended to provide semi-persistent, mobile intelligence, surveillance, and reconnaissance (“ISR”) at the platoon level. Delivery, installation and on-site training of the initial BiB systems, spares and payloads are scheduled to be completed by the end of March.

The BiB aerostat system is designed to provide real-time day/night high definition footage for ISR, detection of improvised explosive devices (“IEDs”), border security and other governmental and civilian uses. The turn-key BiB system is packaged in a standard size crate that is mounted to a trailer and towed from the back of a MAT-V, HUMVEE, pickup truck or other comparable vehicle and can be rapidly deployed within minutes by a two man crew. With the push of a button, the system is activated, the prepackaged envelope, which carries a day/night electro-optical/infrared camera, automatically inflates to the applicable pressure for the mission and is secured to the vehicle by a data capable tether.

WSGI President and CEO Glenn D. Estrella stated, “We are honored that GTC has been selected by the United States Department of Defense to provide a system that supports our troops in the critical challenges of providing aerial reconnaissance for moving platoons. We and GTC look forward to working with the DoD and our customers to deliver advanced systems that meet their demanding and critical requirements.”