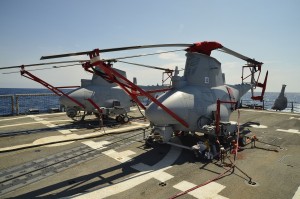 “In today’s environment of ever increasing demands for ISR support, we have proven that a ship with a multi-vehicle Fire Scout detachment can provide the same support to the operational commander as that which would otherwise require multiple land-based ISR assets,” said Cmdr. Darrell Canady, USS Klakring commanding officer. “Our team perfected the art of managing maintenance requirements and crew rest in proving that 12 hour-a-day operations could be sustained almost indefinitely.

“The real achievement on this deployment was a surge we executed to provide just over 24 continuous hours of ISR coverage in late September,” said Lt. Cmdr. Jay Lambert, HSL-42 detachment officer-in-charge. “Completing this milestone required ten separate flights, refueling aircraft eight times, and having the ship setting flight quarters for launch or recovery twenty times. It took everyone on the air detachment and ship working together to make it happen and we are extremely proud of what we accomplished.”

Since 2006, the Northrop Grumman-built Fire Scout system has flown more than 5,000 flight hours – with more than half of the flight hours performing real-world operational tasking during ship-based and land-based deployments within the past 18 months.

“The Fire Scout team of USS Klakring and HSL-42 Det Two successfully demonstrated the potential of Fire Scout with their consistent performance in providing vital information to combatant commanders,” said Capt. Patrick Smith, Fire Scout program manager. “There is a tremendous amount of interest shown for maritime-based ISR and Fire Scout continues to demonstrate its capabilities and potential in the operational environment. Congratulations to USS Klakring and HSL-42 on a job well done!”