Iran Claims to have ‘far more advanced’ Drones in its Arsenal 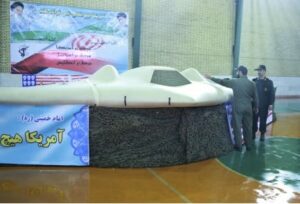 Iran announced it had started to build a copy of a U.S. surveillance drone, the RQ-170 Sentinel (in photo), which was captured last year after it came down near the Afghan border.

Earlier this month, Israel shot down a drone after it flew 40 kilometers (25 miles) over its territory. Hezbollah claimed responsibility for the aircraft, saying its parts had been manufactured in Iran and assembled in Lebanon.

Vahidi said the downed drone did not use his country’s latest know-how, according to a report from Iran’s Mehr news agency on Sunday.

“The Islamic Republic of Iran currently possesses unmanned aircraft with technology that is far more advanced than the drone recently sent by Hezbollah forces to fly in the skies of the Zionist regime (Israel),” he was quoted as saying.

“Undoubtedly the technology in the (Hezbollah) drone … was not Iran’s latest technology,” he continued.

Vahidi had earlier said that the drone’s launch into Israel was a sign of the Islamic Republic’s military capabilities.

In April, Iran announced it had started to build a copy of a U.S. surveillance drone, the RQ-170 Sentinel, which was captured last year after it came down near the Afghan border.

Iran’s military regularly announces defense and engineering developments though some analysts are skeptical of the reliability of such reports.

In a speech on Saturday evening, Iranian President Mahmoud Ahmadinejad sought to present the country as a defender of peace and security in the Gulf region, echoing comments made in the past by Iranian military leaders.

“The Iranian nation has never been an aggressor nation, but history has shown that it is a very good defender,” Ahmadinejad said at a ceremony to honor Iran’s naval forces, according to the Iranian Students’ News Agency.

“The Islamic Republic of Iran has always been a protector of the security of the Persian Gulf.”

Iranian officials have said previously that the country could block the Strait of Hormuz, a vital waterway for the world’s sea-borne oil trade, or strike U.S. military bases in the region if it is attacked.