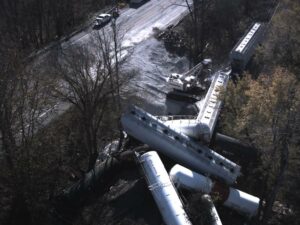 Datron World Communications, Inc., a leader in tactical and public safety communications products, has announced that their Scout UAV was instrumental in helping local, state and federal officials as well as first responders on the ground sort out solutions for dealing with a derailed tanker car containing toxic chemicals in Louisville, KY on November 1st. The derailed tanker car was carrying butadiene, a chemical commonly found in the rubber used to make tires. Additional chemical spills from other tankers included hydrogen fluoride which can cause severe respiratory damage.

“We were able to fly directly over the site of the derailment at various altitudes on multiple days to provide high resolution video as well as still photography to the teams on the ground. They were literally taking the photography we provided and using them in real time in their situational briefings to make decisions on progress as well as next steps,” states Joel Embry.

“The ability to deploy the Datron Scout within minutes coupled with the quality of the imagery and the absence of risk to any personnel collecting the imagery made the Datron Scout the perfect solution to assess the situation in real-time. The expense associated with using a Datron Scout represents a fraction of the cost of deploying a helicopter for this type of aerial observation and intelligence gathering.”

“This is exactly the type of public safety scenario the Datron Scout was designed for,” stated Chris Barter, Scout Program Manager at Datron. “When the situation requires an in depth aerial view of the circumstances and quick response without risk to the team on the ground, the Scout provides the ideal solution.”