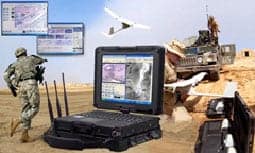 L-3 Communications has announced that it has been awarded an indefinite-delivery/indefinite-quantity (ID/IQ) contract for its VideoScout® family of systems. Provided on behalf of the Marine Corp Systems Command by the United States Navy, the contract provides for the purchase of new equipment, modifications of existing equipment and the development of new system enhancements. If all contract options are exercised, the total potential value of this four-year program is $85 million.

“With more than 1,000 systems in use worldwide, VideoScout provides a unique situational awareness capability for U.S. Marines and Navy personnel around the world,” said Steve Kantor, president of the L-3 Electronic Systems Group. “We are honored to continue to provide new systems, service, training and capability enhancements in support of mission-critical operations.”

L-3’s VideoScout is a family of interoperable video exploitation, intelligence and management systems designed to capture, process and exploit video and telemetry from a wide variety of manned and unmanned airborne platforms, vehicles, ships and network-based video streams. Once data is received, VideoScout allows users to create derivative video files and still images, as well as annotate, geo-reference, store and share the resulting intelligent video with others across the battlespace. VideoScout helps both frontline tacticians and intelligence analysts quickly turn vast amounts of video data into concise, easily shared video intelligence to improve mission planning, execution and post-mission analysis.