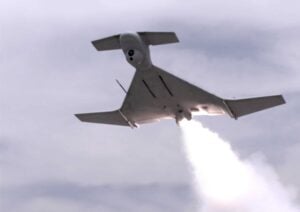 The Indian Air Force plans to induct its first self-destructing combat drones by next year, to enhance its firepower.

The Israeli-made Harop unmanned combat air vehicle (UCAV) will give IAF the capability of hitting high value targets, such as enemy missile and radar sites, without sending its manned fighter aircraft.

“The UCAV are expected to join us by next year enhancing our firepower in both conventional and low intensity conflict,” said a senior IAF official.

Harop will be IAF’s first combat UAV for offensive strikes, though it already possesses a fleet of Searcher and Heron UAVs to perform surveillance and reconnaissance roles.

Unlike the Predator drones being used by the US against the Taliban in Afghanistan and Pakistan that can fire missiles and return after a mission, the Harop is self-destructing, making them a more expensive option.

Developed by the Israel Aerospace Industries, the Harop UCAVs were bought by India two years ago under a deal expected to be worth over Rs 500 crore.

The UCAV cannot only hit enemy radars by locking on to their radio emissions, but also has an electro-optical sensor that allows the remote operator to select static or moving targets in a battlefield.

Harop, with a 23-kg warhead, is 2.5 metre long with a 3-metre wingspan and has a six-hour endurance.

The DRDO is also working on some projects to develop indigenous combat UAVs but they are at an advanced stage.