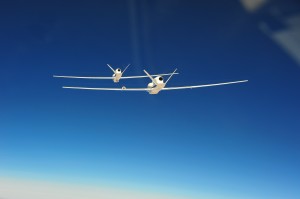 Currently global military aviation relies on a key enabler – aerial refueling. Fighters, bombers, reconnaissance and transport aircraft use “flying gas stations” to go the extra mile. Increasingly, UAVs are conducting combat and ISR operations, but UAVs aren’t designed to be refueled in flight. In 2007, DARPA teamed up with NASA to show that high-performance aircraft can easily perform automated refueling from conventional tankers, yet many unmanned aircraft can’t match the speed, altitude and performance of the current tanker fleet. The 2007 demonstration also required a pilot on board to set conditions and monitor safety during autonomous refueling operations.

Today DARPA has addressed this capability gap. DARPA’s two-year Autonomous High-Altitude Refueling (AHR) program, which concluded Sep. 30, explored the ability to safely conduct fully autonomous refueling of UAVs in challenging high-altitude flight conditions. During its final test flight, two modified Global Hawk aircraft flew in close formation, 100 feet or less between refueling probe and receiver drogue, for the majority of a 2.5-hour engagement at 44,800 feet. This demonstrated for the first time that High Altitude Long Endurance (HALE) class aircraft can safely and autonomously operate under in-flight refueling conditions. The flight was the ninth test and the first time the aircraft flew close enough to measure the full aerodynamic and control interactions. Flight data was analyzed over the past few months and fed back into simulations to verify system safety and performance through contact and fuel transfer–including the effects of turns and gusts up to 20 knots. 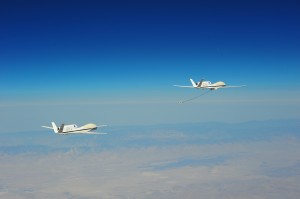 Since HALE aircraft are designed for endurance at the expense of control authority, the program started with the expectation that only one of six attempts would achieve positive contact (17%). The final analysis, however, indicated that 60% of the attempts would achieve contact. Multiple autonomous breakaway contingencies were successfully triggered well in advance of potentially hazardous conditions. Fuel systems were fully integrated and ground tested, demonstrating a novel “reverse-flow” approach with the tanker in trail. This approach opens valuable trade space for future developers to choose between various fixed and modular implementations of proven probe and drogue hardware.

“The goal of this demonstration was to create the expectation that future HALE aircraft will be refueled in flight,” said Jim McCormick, DARPA Program Manager. “Such designs should be more affordable to own and operate across a range of mission profiles than systems built to satisfy the most stressing case without refueling. The lessons from AHR certainly extend beyond the HALE flight regime, and insights into non-traditional tanker concepts may offer further operational advantages.”