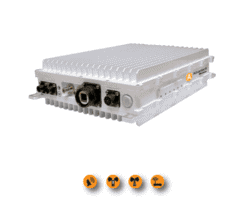 The first two terminals available are the S4920 DVB-RCS SCADA VSAT Terminal and the S5920 Ruggedized DVB-RCS VSAT Terminal. Both terminals are built to withstand the harsh environments encountered in outdoor applications, from the sand and heat of the desert to the rain, humidity and salt fog of maritime applications to the cold and remote environment of northern and alpine locations. The terminals are fully weatherized, designed without fans and temperature certified up to +65 degrees Celsius.

The S4920 terminal is targeted to SCADA applications, including pipelines, remote weather stations, and unmanned remote locations. The terminal can operate on AC or DC power and has unique power-saving features analogous to a ‘sleep mode’ while still maintaining synchronization to the network. The unit can receive a full DVB-S2 transmission from a Hub location and is capable of transmitting up to 512 kbps on the return link to the Hub.

The S5920 terminal is a higher-end ruggedized variation, ideally suited for on-the-move or at-the-pause applications. In addition to receiving a full DVB-S2 transmission it is capable of transmitting at up to 8Mbps. This unit can satisfy the demanding requirements of military and resource-sector customers. It has the same weather-proof enclosure as the S4920 with the additional ruggedization to withstand the shock and vibration encountered in vehicle-mounted applications.

All Advantech Wireless DVB-RCS terminals come with embedded QoS and TCP Acceleration features. Options exist to incorporate encryption (IPSec) and VLAN operation, as well as optimized support for real-time applications such as VoIP and VTCoIP.