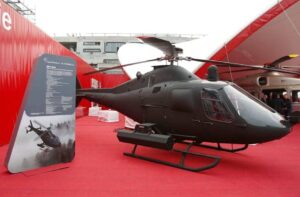 PZL-ŚWIDNIK, an AgustaWestland company, will attend MSPO 2012 (Kielce, Poland – 3/6 September) exhibiting latest technology in rotorcraft confirming its leading role in the vertical lift sector. The company will be displaying a new generation AW149 twin engine multirole military helicopter together with the prototype of the SW-4 RUAS/OPH (“Solo”) single engine rotorcraft unmanned aerial system. The display will also include an Italian Coast Guard’s Search and Rescue-configured AW139, whose airframe was manufactured by PZL-ŚWIDNIK. A complete AW139 cabin, just coming out from ŚWIDNIK’s facility, will be showcased too, providing further evidence of the long lasting fruitful cooperation with AgustaWestland.

Nicola Bianco, Managing Director of PZL-ŚWIDNIK SA, said “Our forthcoming attendance at MSPO 2012 will provide clear evidence of the unmatched capabilities of PZL-ŚWIDNIK as the only Polish manufacturer with the full ability to design, develop and produce state-of-the-art rotorcraft. What we’ll have on display proves the most advanced example of the outstanding Poland’s capabilities in this highly competitive sector, both in terms of current global success with the AW139 and for all new developments shaping our future in vertical lift with the AW149 and the SW-4 “Solo” unmanned variant”.

PZL-ŚWIDNIK SA is actively involved in the design of new AgustaWestland products and is strongly contributing to the development of the AW149 military helicopter. The AW149 is the only new generation military aircraft in its class in decades, representing the best solution to meet the future fleet modernization and operational requirements of the Polish Armed Forces to face the challenges of the 21st Century evolving expeditionary, homeland security and public utility scenarios. The AW149 will also offer second to none industrial opportunities ensuring maximized overall in-country return on investment.

With the RUAS/OPH (Rotorcraft Unmanned Air System/Optionally Piloted Helicopter) version of the SW-4 “Solo” light single and under development in cooperation with AgustaWestland, PZL-?widnik SA is pioneering the exploitation by the European rotorcraft industry community of the benefits that modern rotary wing platforms can offer with unique flexibility for unpiloted operations and requirements. With this solution the company aims at playing a major role in the UAV sector which shows significant growth potential and market opportunities.

PZL-ŚWIDNIK SA has been a major supplier to AgustaWestland since 1996 delivering airframes for several among the most successful of its products. As risk sharing partner of AgustaWestland for the development of the AW139 model, PZL-ŚWIDNIK SA has then strongly committed to manufacturing and supplying relevant airframes. Priorities for PZL-ŚWIDNIK are high quality and efficiency to support AgustaWestland in copying with the rapidly growing world market demand for the AW139. With orders for approximately 650 units so far from over 170 customers in more than 50 countries across the globe for a number of commercial and government applications and over 500 units already in service, the AW139 has set the new standard.