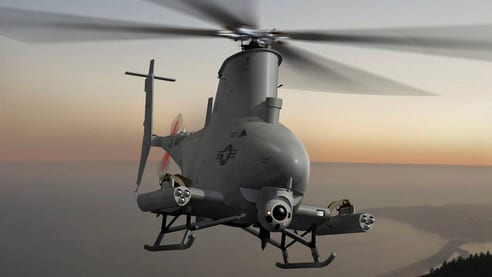 For the first time, the Advanced Precision Kill Weapon System (APKWS®) will be integrated onto an unmanned aerial vehicle, BAE Systems announced today.  The company, which designed and manufactures the guidance section of the laser-guided rocket, was recently awarded a U.S. Navy contract to add the APKWS onto the MQ-8B Fire Scout UAV.

“APKWS’ precision firepower will soon be available on a UAV platform,” said Roy Rumbaugh, APKWS program manager at BAE Systems. “With BAE Systems’ innovative technologies, the Fire Scout will engage targets on land or at sea with laser-guided accuracy while keeping our warfighters out of harm’s way.”

The system is being integrated onto the Fire Scout in response to an urgent operational need and is being prepared for rapid deployment. BAE Systems will support this rapid APKWS integration by performing system analyses and modeling based on its high fidelity, integrated flight simulator.

“This expansion onto unmanned aircraft is the next exciting step after demonstrating performance on both rotary and fixed-wing manned aircraft,” Rumbaugh said.

Unmanned aircraft can operate in regimes that are considered too hazardous for manned aircraft and dramatically expand the types of missions that can be conducted from surface ships.

The APKWS is the U.S. government’s only program of record for the semi- active laser-guided 2.75-inch rocket. U.S. Marine aviators recently completed the initial operational test and evaluation phase of the APKWS program, firing successfully against stationary and moving targets from AH-1W and UH-1Y helicopters. The APKWS system has since been deployed in Afghanistan and the company continues to ship units to theater for use against insurgent forces.

BAE Systems has been the APKWS prime contractor since 2006. The company is partnered with the Direct and Time Sensitive Strike Program Office at the U.S. Naval Air Systems Command for the development, integration, and delivery of the APKWS.