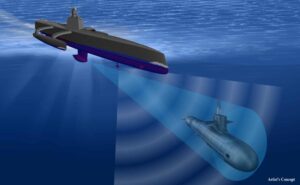 During Phases 2-4 the ACTUV program will attempt to design, construct and demonstrate an unmanned vessel that tracks quiet diesel electric submarines for months at a time spanning thousands of kilometers of ocean with minimal human input.

If successful, ACTUV would create a technological strategic advantage against the burgeoning quiet submarine threat and reduce manpower and other costs associated with current ASW trail operations.

“Our goal is to transition an operational game-changer to the Navy,” said Littlefield. “This should create an asymmetry to our advantage, negating a challenging submarine threat at one-tenth their cost of building subs. The program also establishes foundational technologies for future unmanned naval systems.”