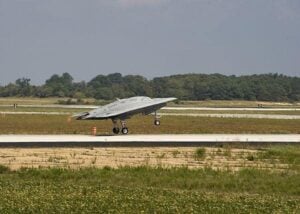 At 11 a.m., the tailless, unmanned aircraft launched from Pax River and flew for a planned 35 minutes. The aircraft reached an altitude of 7,500 feet and an air speed of 180 knots during its flight over the Chesapeake Bay before successfully landing back at Pax River.

“This milestone event is the first of many flights at Pax River to demonstrate X-47B’s compatibility with aircraft carrier flight procedures and launch/recovery equipment,” said Matt Funk, UCAS lead test engineer. “The unique airspace and ship equipment at Pax River allow us to conduct the testing here before we land aboard the aircraft carrier next year.”

The X-47B traveled from Edwards Air Force base, Calif., to Pax River in June to enter its next phase of testing. UCAS-D team members will utilize the specialized testing capabilities and facilities available at Pax River in the coming months to validate the X-47B’s ability to perform in an aircraft carrier environment.

One of the testing facilities at Pax River is a simulated aircraft carrier environment, which will allow team members to ensure the aircraft is ready to operate in testing at sea. Land-based testing will establish X-47B has the ability to conduct precision approaches and to perform arrested landings and catapult launches prior to actual aircraft carrier operations.