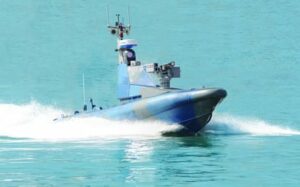 Based on a small speedboat, the ship was deployed by the Israel Navy a number of years ago off the Gaza coast.

Earlier this month, Rafael unveiled a new version of the USV that is longer, faster, more reliable and comes with a high pressure water hose attached for non-lethal missions.

Unlike the earlier model that was equipped with a single engine, the new Protector has two engines – meaning that if one breaks down, the second can keep running. It also is a slightly larger vessel and comes with cameras that provide an operator with 360-degree coverage.

“There is complete redundancy on all of its systems so if something breaks it can keep on working,” explained Giora Katz, corporate vice president and general manager of Rafael’s land and naval sector.

One of the innovative changes to the USV was the installation of a high-powered non-lethal water hose that can be used in nonlethal missions such as stopping Palestinian fisherman from sailing outside their permitted area or preventing flotillas from sailing to the Gaza Strip.

The mission USV payload includes an electro-optical camera for surveillance as well as a docking station that can accommodate a wide range of weapons.