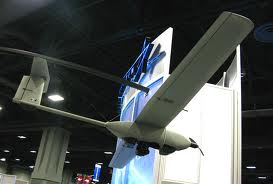 Lockheed Martin and LaserMotive, Inc., recently demonstrated the capabilities of an innovative laser power system to extend the Stalker Unmanned Aerial System (UAS) flight time to more than 48 hours. This increase in flight duration represents an improvement of 2,400 percent.

Stalker is a small, silent UAS used by Special Operations Forces since 2006 to perform intelligence, surveillance and reconnaissance missions.

“We’re pleased with the results of this test. Laser power holds real promise in extending the capabilities of Stalker,” said Tom Koonce, Lockheed Martin Skunk Works® Stalker program manager. “A ground-to-air recharging system like this allows us to provide practically unlimited flight endurance to extend and expand the mission profiles that the Stalker vehicle can fulfill.”

The Stalker UAS was modified for the indoor flight test to incorporate LaserMotive’s proprietary system that makes it possible to wirelessly transfer energy over long distances using laser light to provide a continual source of power to the UAS. At the conclusion of the flight test, held in a wind tunnel, the battery on the Stalker UAS had more energy stored than it did at the beginning of the test. The test was concluded only because the flight had already surpassed the initial endurance goals set by the team.

“This test is one of the final steps in bringing laser-powered flight to the field,” said Tom Nugent, president of LaserMotive. “By enabling in-flight recharging, this system will ultimately extend capabilities, improve endurance and enable new missions for electric aircraft. The next step in proving the reality of this technology is to demonstrate it outdoors in an extended flight of the Stalker.”