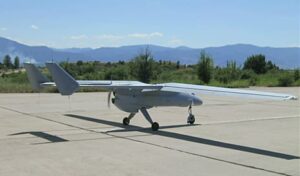 SELEX Galileo, a Finmeccanica company, has successfully performed the maiden flight of its latest member of the market leader Falco Tactical Unmanned Aerial System (TUAS) family, dubbed FALCO EVO. The Falco EVO has a payload capacity of up to 100kg and an extended endurance of up 18 hours. It has flown exceptionally well in its maiden flight and has experienced a smooth touch down after 40 minutes in the sky.

The Falco EVO is an upsize version of the SELEX Galileo’s successful Falco UAS, which is now in service with 4 international customers and has delivered quite effective missions and proven extremely reliable in operation.

After a regular take off from Cheshnegirovo air base in Bulgaria in less than 200 metres of runway, the Falco EVO has levelled up at 1500 ft (990ft agl) and has performed 3 fly-bys of the nearby airport in order to test the UAS’ flap configurations. After performing several landing approaches aimed at verifying the behaviour during landing, the FALCO EVO has touched down smoothly and has returned to the hangar where it will await further trials including testing of its flight and mission envelopes.

“Because the Falco EVO adopts the airframe, avionics and engine configuration from the existing Falco, the new UAS is already showing itself to be a remarkably robust platform,” said Fabrizio Boggiani, SELEX Galileo’s marketing lead for the Falco UAS, adding “We’re looking forward to it being embraced by the market just as the Falco has been so far.”

The Falco EVO can integrate a vast range of payloads that are already in use on other Falco aircraft. It is also fully compatible and interoperable with the current Falco-family ground control segment, further boosting a customer’s ability to perform persistent surveillance.