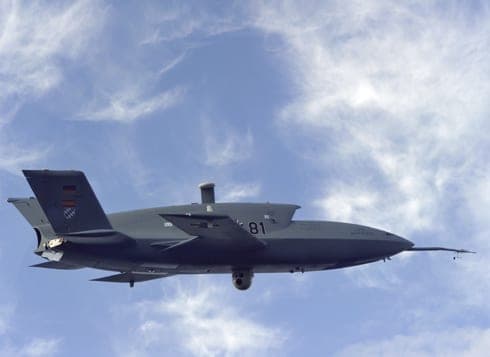 Cassidian has successfully carried out a series of test flights with its Barracuda UAS (Unmanned Aerial System) technology demonstrator at Goose Bay military airfield in Canada.

This year, the unmanned aerial test bed completed five test flights in June and July 2012 in the context of the research and development programme “Agile UAV in a Network Centric Environment” (Agile UAV-NCE).

These involved the Barracuda technology demonstrator flying in combination with another unmanned aerial vehicle, which was simulated by a converted Learjet. The two aircraft flew missions where they each had different role profiles that were autonomously coordinated and synchronised with one another.

“With these latest successful flights by our UAS technology demonstrator, we have made another great leap forward in our developments for the world’s most promising future markets in our industry,” said Cassidian CEO Stefan Zoller after the flying test bed had landed safely at Goose Bay Canadian air force base.

Carried out by Cassidian’s Barracuda project team, the test flights delivered vital information regarding flight with several networked UAS and the autonomous distribution of roles between unmanned aerial vehicles in complex mission scenarios. The role distribution was predefined in each case. Coordination between the two UAS was largely automated.

However, the missions could be adapted by uploading new mission data while the aircraft were in the mission zone. This was accomplished via the new network-centric data link. The flight test engineers transmitted not only individual new waypoints, but also entire mission segments from the ground station to the UAS in flight, which immediately responded to its new instructions.

During the 2012 test campaign over the Goose Bay region of the Canadian province of Newfoundland and Labrador, the jet-propelled unmanned demonstrator Barracuda again flew completely autonomously along pre-programmed flight profiles including auto-taxiing processes. The Barracuda and the Learjet simulating the second UAS were monitored from the ground station with respect to flight safety only.

The Barracuda demonstrator is designed as a technology test bed with a modular structure and a flexible configuration, enabling a wide variety of systems and flight profiles to be tested and a wide range of mission requirements to be demonstrated. The avionics system was developed as an open and modular structure that allows a large number of sensors and data link solutions to be integrated with the demonstrator.

Electro-optical and infrared sensors, laser target designators, an Emitter Locator System (ELS) consisting of detectors for picking up radio-magnetic signals, and advanced Synthetic Aperture Radar (SAR) systems that operate on the multisensor principle can all be accommodated in the Barracuda’s payload bay.