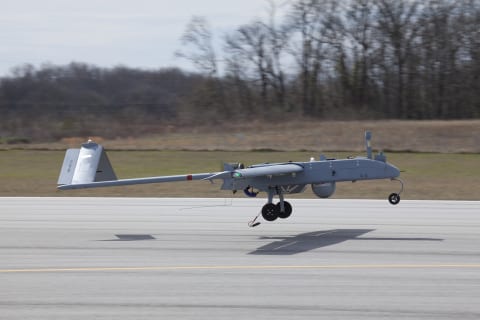 “The RQ-7B Shadow upgrade, dubbed V2 by the Army, includes enhancements to every part of the system, from the aircraft itself to the ground and support systems,” says Senior Vice President & General Manager Steven Reid of AAI Unmanned Aircraft Systems. “It represents all of the agility and performance needed for current mission requirements, as well as robust capabilities to meet future needs. As a result, the Shadow system will perform even more reliably in core areas including intelligence, surveillance and reconnaissance; target designation; communications relay; and battlefield damage assessment; but it also will excel in new missions such as manned/unmanned teaming.”

The new RQ-7B Shadow aircraft builds on the same architecture that has proven highly successful on the current Shadow aircraft throughout nearly 750,000 flight hours. It is multi-mission equipped with an integrated payload for day and night imagery, as well as communications relay and laser target designation capabilities. The aircraft also applies the Army’s interoperability profiles, while vastly increasing communications bandwidth and enabling digital data delivery.

In addition, the upgraded Shadow aircraft has:

Addition of the UGCS and UGDT to the RQ-7B Shadow system supports the Army’s vision for a universal unmanned aircraft systems operator, and streamlines the development of new mission sets including manned/unmanned teaming.

“With common hardware, software, controls and user interfaces, the UGCS has been proven interoperable with the Army’s Gray Eagle® and Hunter assets, as well as the Shadow system,” says Reid. “It also complies with unmanned aircraft systems interoperability recommendations including NATO Standardization Agreement 4586. Based on our battle-proven One System® command and control architecture, the UGCS is ‘universal’ in the most fundamental sense.”

“We’ve worked alongside our customers since the very first Shadow contract in 1999 to provide smart and reliable technologies to meet emerging mission needs,” says Vice President, TUAS Vance King of AAI Unmanned Aircraft Systems. “Today’s RQ-7B Shadow TUAS have completed more than 170,000 missions, and with the new configuration, every element of the system has been elevated with game-changing capabilities, including multi-mission flexibility and greater performance.”