Sgt. Christopher Harris was conducting a routine reconnaissance mission in Kunar Province, Afghanistan, in 2009, when the Puma unmanned aircraft system, or UAS, he was operating showed nearby, real-time footage of insurgents planting an improvised explosive device, or IED, along a U.S. Army convoy route.

“These guys had set an IED two kilometers away from us,” Harris said, recalling the incident. “They were waiting for us to drive by for what looked like a planned IED-initiated ambush.” 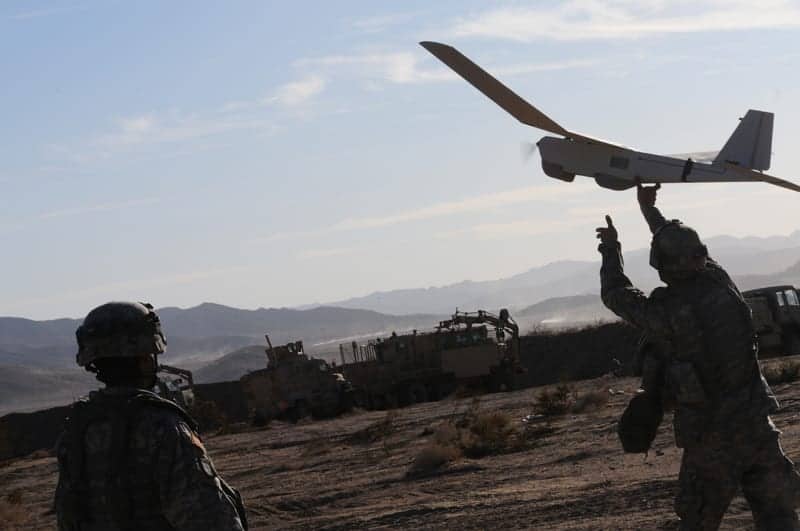 Pfc. Christopher Sims, a combat engineer with the 449th Engineer Company, deploys an unmanned aircraft system at the National Training Center at Fort Irwin, Calif., March 20, 2012. The Puma is equipped with infrared cameras and capable of flying out ahead of route clearance patrols to identify potential threats

The Puma UAS is a 13-pound, portable, hand-launched unmanned aircraft system, known as a UAS, with a wingspan of 9.2-feet and electro-optical/infrared, or EO/IR, sensors able to beam back real-time imagery from combat-relevant locations.

The EO/IR sensors on Harris’ PUMA UAS showed live, real-time images of the insurgent activity on his one system remote video terminal, or OSRVT. The OSRVT is a laptop-like display screen and antenna able to give Soldiers like Harris advance warning of nearby threats.

Using the UAS technology, Harris was able to pinpoint the exact location of the insurgents and the house they were operating out of within five meters. Then, after carefully checking the area to ensure there were no nearby civilians or additional structures, Harris called in a 155m artillery strike, destroying the house and ensuring safe passage for his unit’s convoy.

“I was able to observe rounds directly hitting the target,” explained Harris, who was serving as an infantry Soldier with the 2nd Infantry Division, Fort Lewis, Wash. “During our battle damage assessment, we saw that the house was destroyed. Explosive ordnance disposal teams were then called in to deal with the IED.”

There have been hundreds, if not thousands of instances similar to this throughout the last ten years of war in Iraq and Afghanistan, wherein UAS technology has been proven to bring a game-changing, life-saving capability to forces in combat; in fact, the number of UAS in theater has grown exponentially since the start of the wars, expanding from a handful of systems in 2002 and 2003 to more than 4,500 UAS aircraft in service today.

The UAS systems currently being used span a range of capability, from larger, medium-altitude systems such as the Gray Eagle and Shadow to small, hand-launched UAS such as the Puma and Raven systems.

In each instance, UAS provide commanders and infantry engaged in conflict with critical intelligence, surveillance and reconnaissance assets, providing electronic “eyes” able to spot danger over a hill or around a corner, thus keeping more Soldiers out of harms’ way.

“I am able to tell my lieutenant if we are about to go up a hill let’s toss a bird up there and see what we’ve got, just a quick recon without sending anybody up. If there is nothing dangerous on the mountain, we proceed,” Harris said. “Using UAS in this way saves time and energy by not sending Soldiers up there, and you save lives by not endangering somebody.”

“We go everywhere and provide overwatch,” Gray said. “We can put a UAS up 3,000 feet to watch a convoy. We often fly our UAS missions along routes after route-clearance missions have gone through to make sure routes remain safe for convoys.”

UAS such as the Shadow provided overwatch security during the Iraqi elections in January, 2009, ensuring important historic activities could not be sabotaged by insurgent attacks, said Staff Sergeant Catalina Avalos, a noncommissioned officer with the Washington National Guard.

“We provided 24-hour overwatch on site to be sure there was no insurgent activity, no IEDs being planted and no suspicious occurrences,” Avalos said. “In some instances, we have been able to see actual personnel digging holes for IEDs and laying down the wires.”

Avalos added that if the electro-optical cameras do not need to specifically catch insurgents in the act of planting an IED. UAS infrared sensors can detect temperature changes in the ground, that can sometimes indicate a roadside bomb has recently been planted.

“We are able to see a difference in ground that has been freshly dug, versus something that has been there a while. So, when you see that, you then have EOD units go to the site to verify if it is, in fact, an IED,” Avalos said.

Avalos said UAS have revolutionized combat in ways that are unbelievable.

“Commanders now know almost everything that goes on in their battle space,” Avalos said. “We fly aircraft longer than enemies can stay awake.”

UAS also assist with what is called “negative terrain analysis,” wherein operators look to see whether elements of the terrain have changed, Avalos added.

Avalos said many of her skills using UAS in combat were sharpened during a six-month training course for UAS operators at Fort Huachuca, Ariz. Avalos graduated from the training in 2008.

UAS training spans the entire gamut of activity, from systems engineering, UAS sensors, deployment and interference training, Avalos said. While UAS operators have a slightly different role compared to UAS maintainers, each student learns every skill during training so as to ensure students are aware of all the nuances involved in UAS deployment.