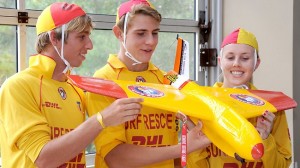 Technology typically used for military operations could soon be monitoring bathers and sharks off Australian beaches.

The project will test the effectiveness of unmanned flying drones as a surf lifesaving tool.

A three-month trial on Queensland’s North Stradbroke Island is expected to start in September, with lifesavers hopeful the drones will be rolled out nationally.

“This technology can be applied to a range of … scientific areas such as monitoring erosion, bush fires and tracking shark movements, and allows us to spot a swimmer in trouble before something serious occurs.

“There’s an old saying in surf life saving – ‘if we can’t see you, we can’t save you’,” Mr Williamson said.

The drone technology isn’t designed to be a replacement for surf patrols.

About the size of a large model aeroplane, the drone is not intrusive, is cost effective and can operate at different hours than helicopters, the current technology of choice.

The proposal is part of a broad action plan launched by the Australian Water Safety Council at a conference in Sydney on Monday.

The three-year plan aims to halve water-related incidents by 2020, and is the result of extensive consultation across all domestic water-related bodies.

Across the Asian region, 250,000 children drown each year.

This statistic has prompted the council to enter into a historic agreement with Japan’s Water Safety Nippon to promote discussion on water safety.