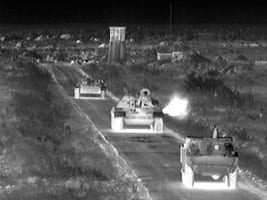 Sofradir, the number one developer and manufacturer of a key class of infrared detectors for military, space and industrial applications, announces today that it will demonstrate a prototype High Operating Temperature L-HOT MWIR integrated detector cooler assembly (IDCA)  that offers a significantly improved detection range over earlier models.

“Producing infrared detectors that are compact, lighter and save energy is driving much of our developments at Sofradir,” said David Billon-Lanfrey, VP R&D at Sofradir. “L-HOT MWIR ensures that customers get a high operating temperature IR detector with all the gains and no trade-off in image quality and NETD in order to keep the highest detection range.”

NETD (Noise-Equivalent Temperature Difference), the signal over noise ratio of the IR detector is an important attribute for evaluating image quality and detection range (the ability to see smaller objects at greater distances in all weather conditions). An IR chip with high standard NETD performance is more apt at detecting slight differences in temperature between objects. This provides more detail and more accurate images,  which is desirable for users looking for SWaP reductions in hand-held thermal imagers, small gimbals for small Unmanned Aerial Vehicles (UAVs) as well as long endurance systems, such as border surveillance or 24hr surveillance.