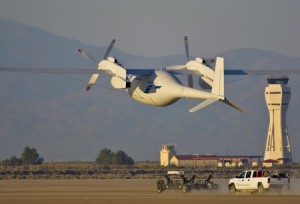 The 28-minute flight began at 6:22 a.m. Pacific time as the liquid-hydrogen powered aircraft lifted off its launch cart. Phantom Eye climbed to an altitude of 4,080 feet and reached a cruising speed of 62 knots. After touching down, the vehicle sustained some damage when the landing gear dug into the lakebed and broke.

“This day ushers in a new era of persistent Intelligence, Surveillance and Reconnaissance (ISR) where an unmanned aircraft will remain on station for days at a time providing critical information and services,” said Darryl Davis, president, Boeing Phantom Works. “This flight puts Boeing on a path to accomplish another aerospace first — the capability of four days of unrefueled, autonomous flight.”

Phantom Eye is the latest in a series of Boeing-funded rapid prototyping programs, which include Phantom Ray, Echo Ranger, ScanEagle Compressed Carriage, and an associated Common Open Mission Management Command and Control (COMC2) system capable of managing all of the company’s unmanned assets.

“While Phantom Eye is important for many reasons, future ISR, strike and bomber programs also will benefit from the technologies we are developing and maturing for our customers,” said Davis.

The flight took place following a series of taxi tests in April that validated ground guidance, navigation and control, mission planning, pilot interface and operational procedures.
“This flight demonstrated Phantom Eye’s initial handling and maneuverability capabilities,” said Phantom Eye Program Manager Drew Mallow. “The team is now analyzing data from the mission and preparing for our next flight. When we fly the demonstrator again, we will enter higher and more demanding envelopes of high-altitude flight.”

Phantom Eye’s innovative and environmentally responsible liquid-hydrogen propulsion system will allow the aircraft to stay on station for up to four days while providing persistent monitoring over large areas at a ceiling of up to 65,000 feet, creating only water as a byproduct. The demonstrator, with its 150-foot wingspan, is capable of carrying a 450-pound payload.