Boeing Demonstrates SATCOM on the Move Between Australia and US 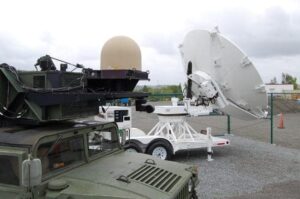 Boeing has successfully demonstrated its SATCOM on the Move (SOTM) product on a live Ka-band satellite network. The demonstration in May connected three sites in Australia and the United States using integrated voice, video, and data communications over the increased bandwidth available on the latest generation Ka-band satellite mobile terminals. This capability uses the Wideband Global SATCOM (WGS) system, also developed by Boeing.

This latest SOTM product evolved from combat-proven technologies used by the U.S. Army during Operation Iraqi Freedom in 2003.

“This demonstration shows the maturity and readiness of Boeing’s capabilities in the suite of services required to provide satellite communications on the move,” said Kim Gillis, vice president and managing director of Boeing Defence Australia. “Our proven SOTM technology will provide defense customers with confidence that HQ on the Move capability can be achieved on the Ka-band satellite system ready for the WGS network.”