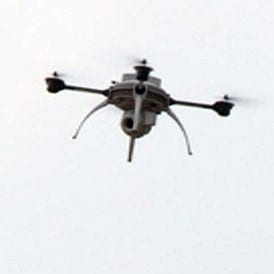 Unmanned Aerial Vehicles (UAVs) have become notorious for their use by the US military in Afghanistan and Pakistan, where airstrikes by pilotless drones have sparked a debate about the ethics of waging war by remote control.

But the increasingly sophisticated technology has many more uses away from the battlefield.

Smaller aircraft have been tested by some UK police forces and are expected to be deployed during the Olympics as a surveillance tool.

Many other potential applications from mining and mapping to freight transfer and farm regulation have led some of the biggest names in the aerospace business to start lobbying for the civil aviation authority to allow unmanned vehicles to share the skies with piloted planes.

The British Association of Airline Pilots is worried about safety but, in at least one area of the country, airspace has already been set aside for unmanned vehicles.

With Welsh Assembly backing, West Wales Airport in Aberporth succesfully applied for an area of air space in south Wales to be segregated specifically for testing unmanned aircraft, placing it at the forefront of a £60bn global market.

The final stage before achieving integration of the skies nationwide is to prove the software can detect and avoid danger.